Along with the rest of the USA, I am overwhelmed with choices, budget concerns, and just too sutff....too materialistic. This past Christmas (09) I cut back quite a bit and we still had a great time and didn't feel deprived at all. I just cut down a few gifts, did a little less baking, and stopped overbooking the holiday season.

Evan loved Ben the Elf and it was the highlight of a lot of our holiday season...simple things though....some gifts but some experiences also. I did do the 24 days gifts but told everyone that 09 would be the last year for that. Instead in 2010 I will create a St. Nick's Day basket for each and they will get it on St. Nick's Day. I'm not sure if the cost will really be any less but it will certainly be easier than finding and wrapping 24 gifts times 5.

I did miss out on baking like I wanted to so I think I will do just a little more of that in 2010. The Christmas party and the Christmas Eve dinner went very well. This year I will be planning simpler fare for Christmas Eve. One year I will do more of a meal and the next fingerfoods and appetizers, So 2010...is the finger foods year!!

I cut down on stocking stuffers and no one seemed to mind at all...there were still several things but not near as many as in the past. I know for sure that wrapping will have to happen early in 2010....it was almost the death of me...lol. As well as forgetting where I hid gifts. I've already cleaned out a closet and have stuff accumulating in there...so at least it will all be in the same place...Plus wrapped gifts and Santa gifts will need to be kept under wraps better becuase Evan will be four and watching a lot closer.

It came to me when I sat down to write this ....that less is more...when we slow down and take time to relish the activities (like Ben the Elf)...it's so much more than rushing to do this, this, and this. When we limit our parties and gifts we take more time to relish the occassions and the presents. So Simplify Christmas is my motto for 2010...and I've even simplified Rudolph Day!!! I mean after all it's suppose to be FUN not frantic...!!
Posted by Ginger at 3:08 PM No comments:

I'm working on my blogs again....and I've discovered the new page feature here at blogspot...if you look directly under my header picture you will see links to different pages....so far all I have up are the Home link and the link for 2010 Rudolph Days....but it's a start....:)
Posted by Ginger at 8:14 PM No comments: 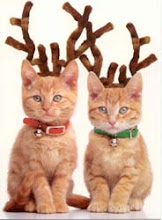 Ginger
I am a collector of stories. I believe this journey through life that each of us embarks on...while friends and family accompany us....in a way...all of us are alone on the journey. For each person's journey is unique and specific only to the individual traveling it. But travel with me for a bit..... because together the journey is richer, more meaningful, and more like an adventure!